Turkey and the many uses of yoghurt

In 2013 we had the opportunity to go to Turkey both as independent travellers and on an extended small coach tour. It was a place I had always wanted to see being, as it is, the crossroads between Europe and Asia. The influences to be seen there from the Ancient Egyptians, through the Greeks, Romans, Arabs, French, English and now tourists, was extraordinary and enlightening. To see Hagia Sophia from the straits between the Mediterranean Sea and the Black Sea, knowing I was ‘between’ continents, was extraordinary. To go inside it and walk around it was an opportunity I could not possibly miss and I was not disappointed. As usual, we headed for the markets and here is me peering into a shop to see some of the extraordinary things available. We were looking for lunch and this shop had the most amazing array of flavoured yoghurts on one side in a display similar to an ice cream freezer cabinet. That display, and accompaniments we had with other meals throughout our trip, inspired me to include flavoured yoghurts in the cookbook. 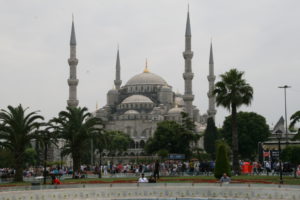 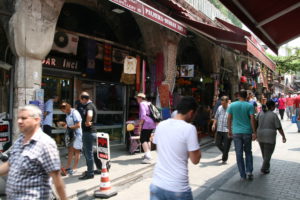 There are many forms of yoghurt but the best to use are the plain ones where you add your own flavours. This ensures that they are neutral flavours without excess sugar or salt which can then be controlled for health reasons. I use traditional yoghurt for sweet dishes and Greek yoghurt for savoury dishes. This way I use the basic flavour contained within the yoghurt to complement my added flavours. 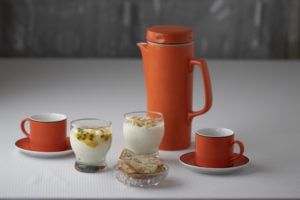 I especially loved the contrast of a muesli mix of fruits and nuts presented to us in a traditional yoghurt to accompany the dark, intensely flavoured Turkish coffee. Accompanied by an Italian biscotti, it made for a refreshing start to the morning, sitting out on a hotel terrace high above the Bosporus. Those coffees kept me going all through the day. In the cookbook, Healthy Living with Warfarin, I served the yoghurt and muesli breakfast with a more traditional choice of coffee and loved getting out my retro 1960s coffee set to serve it in. Even the glasses used for the yoghurt and muesli mix are retro as they were an engagement present to us in 1968. One of the benefits of using dried fruit in the muesli is that, by allowing the mix to stand for a few minutes, the natural sugars of the fruit come out into the yoghurt and the fruits absorb some of the liquid from the yoghurt, thereby thickening it. The addition of passionfruit just increased the indulgent feeling of the breakfast without making it too sweet. Don’t forget the benefits of nutmeg, cinnamon, cardamom, which is especially good with fresh pineapple, and, of course, a good vanilla.

Traditional yoghurt can be a lovely dessert accompaniment. Serve it over fresh or tinned fruit, a fruit cake or a traditional fruit pie. It is great with apple, pineapple, apricots and peaches especially when you include pecans, walnuts and almonds.

Greek yoghurt is a wonderful base for the savoury yoghurt dishes and here I have made it into a dip for dry biscuits or unleavened bread and, with the same recipe, a sauce for barbequed meats, kebabs, gözleme – that wonderful mix of vegetable and pulled or ground meat all wrapped up in unleavened bread which is such a Turkish delight, and pide, which is similar to but so different from pizza. 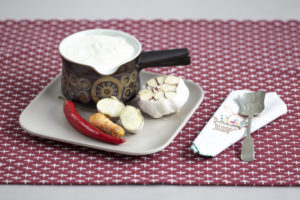 Any allowable herb or spice can be added to this basic yoghurt to achieve many different looks and tastes. Ground turmeric can be used to make a colourful dip but I find that a little bitter as turmeric and I don’t get on particularly well. Instead, I use bloomed saffron as so little goes such a long way and provides an aromatic edge to the dish. Garlic, minced and even roasted, provide a great sauce for meats. Finely chop a hot chilli, a raddish or skinned and deseeded sweet tomato with plenty of white pepper into the yoghurt for a totally different taste sensation.

Avoid the chopped fresh mint, parsley, chives, basil and coriander leaves as their oils can often interact with the yoghurt and should be avoided anyway because of their high Vitamin K content. Leave the cucumber out as it is also high in Vitamin K. Try cumin, ground coriander seeds, chopped rosemary, ground fennel instead. If you have never tried sumac, give it a go as well. It is great in a za’atar or spice blend, it is sprinkled over everything from pita to lamb chops, salads and desserts.

Sweet or savoury, there is always a place for yoghurt.

Traditional food in Turkey is not meat based because meat is expensive. It generally centres around rice, bulgar wheat, vegetables and bread in their various forms. Bread is a daily purchase for all families and is usually used as a tool for eating with the fingers or as a wrap around a mix of meat and vegetables. At the table, the meat and vegetables are served separately on a platter making it easy for you to decide what you want to eat.

Breakfast is often the largest meal of the day and can include a wide variety of cheeses, butter, egg dishes, salads which are usually vegetables chopped finely into yoghurt, sausages, especially sucuk, bread, especially simit which is a circular bread covered in sesame seeds and absolutely delightful, and a common dish across the whole of Turkey called menemen which is a mix of tomatoes, green peppers, onion, olive oil and eggs which I always avoid because of the green peppers and olive oil, neither of which agree with me. However, I am told that it is a great start to the day.

Lunch is almost always eaten out, especially by the younger generations who work, and includes kofte, doner kebabs, kokorec which is a sausage made out of suckling lamb or goat intestines with a minced offal mix inside which is then grilled (which I have yet to bring myself to try), kumpir which is a baked potato split open and filled with all sorts of things. Burek which is a baked phyllo pastry dish often cooked in a very large pan out of which a wedge is cut and served, traditionally filled with meat and cheese. However, be aware that it is increasingly being filled with spinach to replace the meat which is a series food to be avoided by those of us on warfarin. Dinner is usually light and often just a soup and bread.

Other street food is easy as it is usually something rolled up in or pancaked between bread. You can say ‘yes’ to that, that and that, but ‘no’ to whatever you wish to avoid. Very little street food is cooked and held hot making it very safe for you to choose from. Its ingredients are usually cut up ready for you to choose from then made in front of you which also makes it quick to get take-away. You will even have a choice of which bread you want it wrapped in. When there for a period of time, try them all. The red powder found on most chopped onions is sumac which is safe for everyone and gives a slightly tangy or acidic flavour similar to that of a sweet lemon or lime. It is also fragrant. I use it extensively. The other common street food is manti which is a type of dumpling and usually contains a simple ground meat and spice mix, which is then either boiled or steamed. If you can see fresh green leaves inside, avoid it. If it is the traditional mix, enjoy it.

Because of the international influences in Turkey and it being a crossroads between the East and West, the traditional food is very diverse. Its greatest heritage is from the Ottoman empire where the fusion of Mediterranean, Egyptian, Greek and southern European foods intermixed with the foods of the Turkic people from the southern steppes of Central Asia and it is from here where the use of yoghurt stems. In turn, the Ottomans influenced Western Europe with its refined uses of spices and the use of rice in both sweet and savoury dishes. In Istanbul and throughout the northern part of Turkey, the Ottoman influence is greatest. From Bursa to Izmir there is a preference for rice over wheat, stews or türlü, and koftes, which are ground meat, usually lamb or mutton, mixed with ground herbs and often presented on a ‘stick’. We had koftes presented on a stick of rosemary, leaves intact, a kebab spear and simply as a meatball. All are delicious.

Along the coasts, fish of all different types are available especially the Black Sea anchovy or hamsi. Because of the influx of tourists, fish and chips are available everywhere. On the Mediterranean coast fish mixed with corn dishes is very common

In the southeast around the Black Sea and in Central Anatolia, keskek or kashkak is a special meal of meat or chicken with wheat or barley to make a stew. It is a special dish for the Turks and has UNESCO status. It is often prepared for groups of tourists for an end-of-tour dish as a specialty of Turkey. It is green free in itself.

Be careful with dolmas. They are raw vine leaves, soaked in olive oil to soften and then wrapped around a rice and eggplant mix with other fresh herbs. They are full of vitamin K. Patlican salatasi is eggplant salad. Also avoid. Humus, lentils and broad beans I avoid because I know what they do to my INR. That said, if you are used to them, go for them. Be careful of soslu patlican and turp otu as well as zeytin piyazi. They are all green based salads.