Skip to content
Home/Uncategorised/Myanmar and saffron prawns with lime

Myanmar and saffron prawns with lime

Any reminder of our trip to Myanmar always brings back two very strong and very different memories. The first is that I had a serious fall in our garden two weeks before we went and broke three ribs. The second is the wonderful, tasty but simple seafood and fish dishes we had on the trip which were almost always served with mint (a no-no for me) and fresh lime or lemon which were very welcome. Prawns cooked on bamboo sticks over an open grill were the inspiration for the Skewered prawns in saffron to be found on page 29 of the cookbook.

After I fell, I realised that I had not pierced anything serious in my chest as I could breathe, laugh at my own stupidity, climb our stairs and have a warm shower so all was good. My eldest son who was home at the time, offered to call an ambulance but I said ‘no’. I was concerned that the doctors would prevent me going on the trip and I was not having a bar of that scenario. As a highly trained First Aider I knew that all the doctors would do would be to bind up the ribs to give them support whilst they healed. I knew I could do that. So, off we went. I did see my doctor when we returned and he sent me for xrays but, as I suspected, all was healed.

Burma had always had an attraction for me to visit but it was not until it opened for groups that we went. Although we had back-packed through central Asia earlier in our lives, we had avoided Burma because of its political turmoil which, unfortunately, has returned to that country as I write even now.

We took up an offer to be on one of the first small group trips on the Irrawaddy. We had a short stay in Yangon, then flew north to Mandalay and joined the cruise down the river back to Yangon and then flew on to Bangkok and home. We did it, despite my ribs, although I did acquire the nickname of ‘slowly, slowly’ by the men who worked the boat. This was because, along the Irrawaddy there are no wharves or formal jetties because the river floods at least twice a year and, close to Yangon, is also subject to tidal influence. Each place we stopped required the creation of a temporary jetty which was, really, just a few planks here and there and, sometimes, a scramble up a sand dune with the men offering a hand up. My ribs complained but I told them to shut up and just get on with it! Because of the flooding even the middle of the river is subject to rapid changes in the location of sand banks and, on a couple of occasions, we became stuck on a new one and, on another one, most of the crew got off onto a large sandbank and played a quick game of soccer. The image below shows me, using walking poles and climbing up the bank at Mingay with the help of the men. They did a good job for all of us, not just me. There are no wharves for any industry. 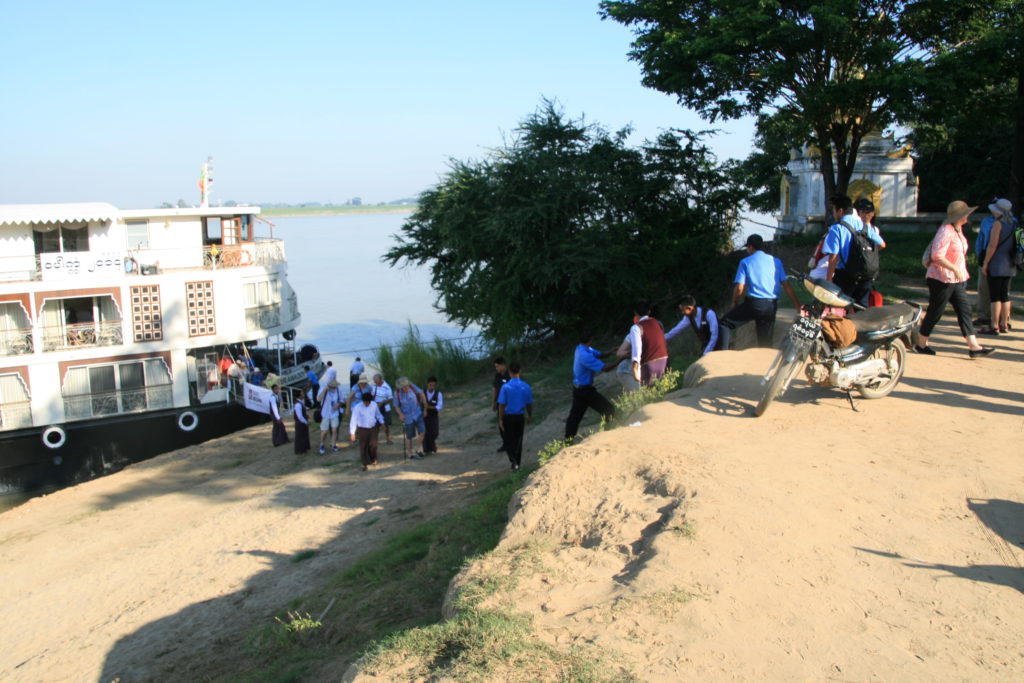 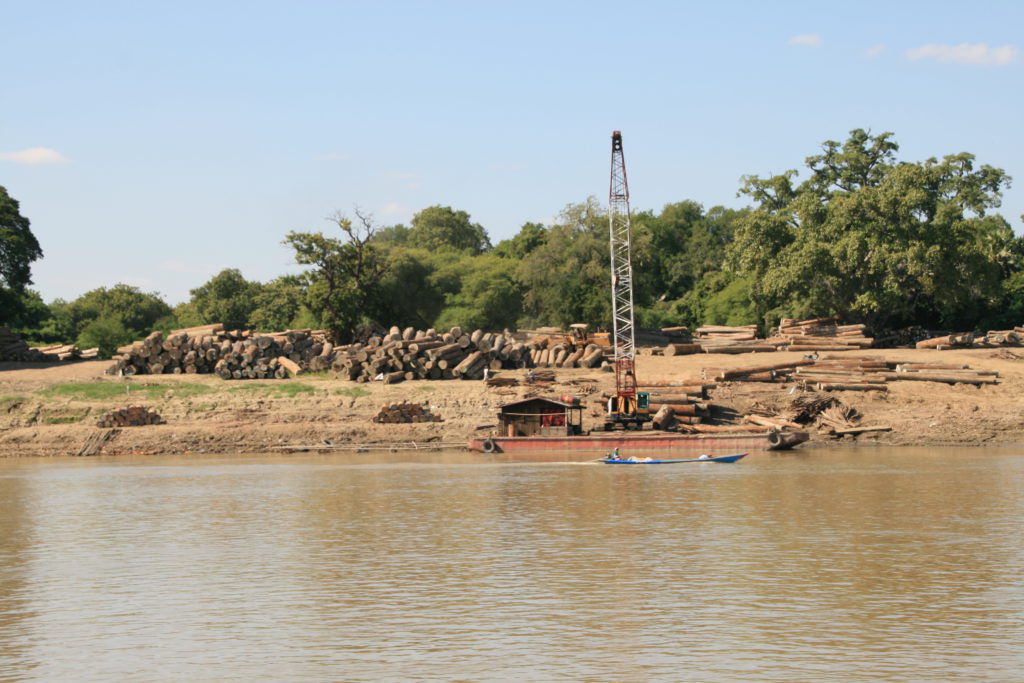 Being in atrial fibrillation and on the anti-coagulant Warfarin, I thought very carefully about what I might encounter in Burma. Here, in Sydney, Australia, where I live, we are lucky enough to have multi-cultural street food fairs and we went to some before we left. Burmese food, we discovered, had not yet suffered from the ‘green revolution’ so much a fashion today where the view is that if it does not have a pile of fresh, chopped greens on it, it is not healthy for you. For me, it is the opposite, and I avoid fresh greens at all times. I get plenty of Vitamin K from other sources.

What we found was traditional Burmese food of the south. The north is still, to some extent, closed off. It is based on the staple of rice in all its forms from pounded rice, through rice flour to steamed rice and noodles made with rice.  with curries, salads, soups, rice vermicelli and white rice as well as street food focussing on food cooked in front of you and therefore ‘safe’ as it is never held for long.

The curries were generally made from dried spices rather than fresh greens or vegetables which made them an excellent source of food for me. Most had the traditional base of onions, dried shallots, garlic, chilli, ginger and turmeric but also had paprika, garam masala and tamarind paste.  As well, they are simple curries of the ‘what you see is what you get’ type with additional side dishes from which you can choose what you want to add. Some curries include fresh greens but that is quite new and is not found in the countryside, yet.

When pork, poultry, goat and some beef are used, it is generally slow-cooked as a curry as there is almost no access to refrigeration in the countryside and the meat is usually older than we in the west are used to. 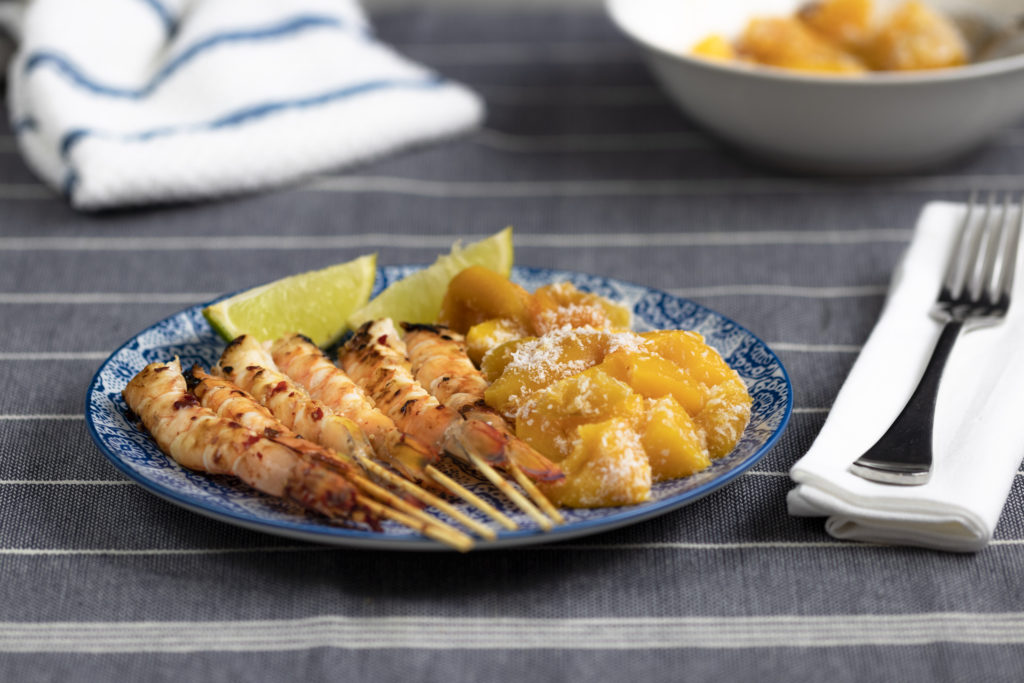 In the south, there is more seafood used and this is where the inspiration comes for this dish. It is served with fresh mango, dried coconut, lemon and lime and makes a wonder shared starter or a main served with a green papaya salad. The Burmese, like many cultures, talk about ‘fish’ and ‘fresh fish’ and it is sometimes very confusing. Anything that comes out of the sea is ‘fish’ no matter what form. Anything that comes out of a lake or a river is ‘fresh fish’. Prawns are ‘fish’.

Their salads are usually based on a variety of ingredients including pickled ginger, dried shrimps, carrots, shredded green papaya (OK for you), boiled prawns, curried duck eggs and potatoes. Although some include specialties such as young snowpea vine, mustard greens and banana stem cores, these can easily be moved to one side and ignored.

The street food included fritters (ask what is in them as many are based on mung beans, chopped bottle gourd, pulses and chickpeas which I avoid but other are made on onion rings, fish, banana, potato and tofu), samosas (samosa in Burmese) which are usually mutton and onions, and mont which is a generic term for wonderfully flavoured rice balls sweetened, using grated coconut and coconut milk which might contain almost anything else in the way of chopped fruits and nuts, and savoury containing usually shredded pork, chicken or duck meat, peanuts, ginger and sesame seeds.

There is little to avoid in the traditional cooking in the Burmese countryside. Go an enjoy it when it is safe from political turmoil and covid-19 to return. We loved it and found the traditional Burmese people wonderful to interact with. They have a unique approach to life. Don’t worry about your condition in this world, it can only get better for you in your next incarnation if you do the right thing now. 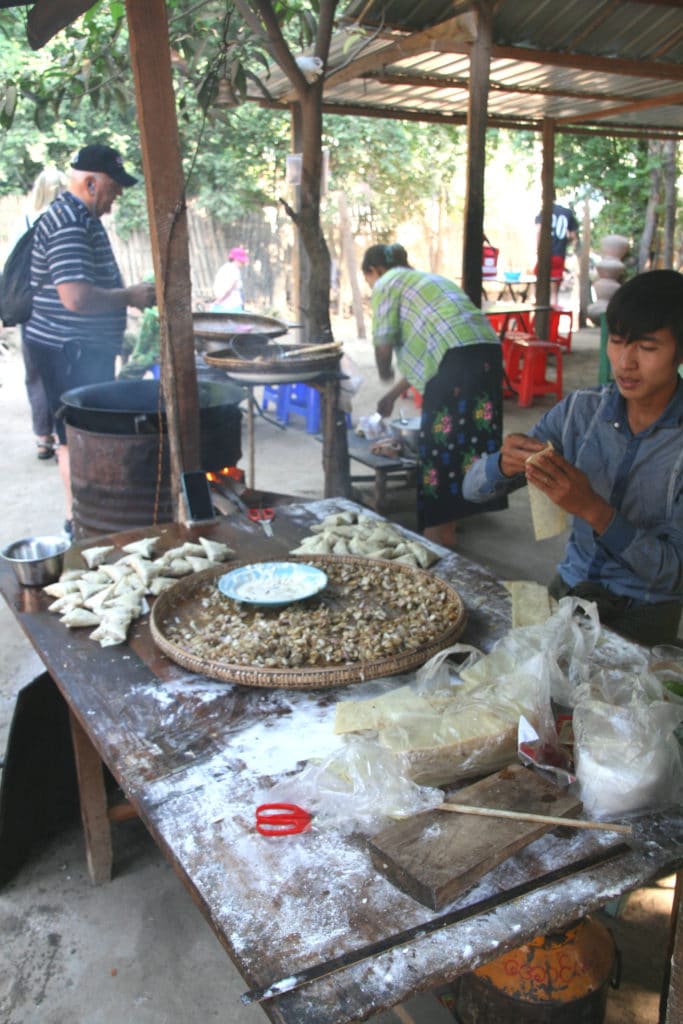 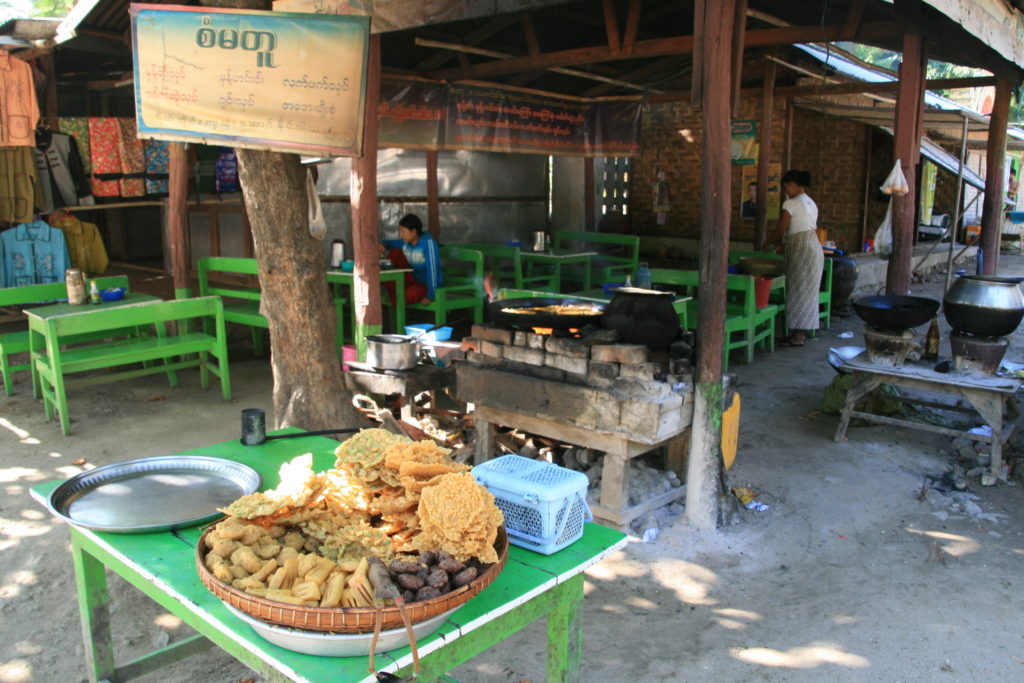