Cambodia And A Flash-Fried Seafood Basket

A few years ago, we had the opportunity to travel through Cambodia with an ex-pat working there and were taken to some extraordinary places. As always, I am drawn to the local food markets and their street food and I found inspiration here for my flash-fried seafood. Cambodia, being what it is, a low-lying peninsular surrounded by the Gulf of Thailand and running through the middle the mighty Mekong with its delta feeding into the Gulf and its regular flooding during the wet season – fish, both water (fresh) and sea food form the basis of much of its protein consumption. Pork is the other protein. Beef is not generally eaten for religious and economic reasons. Only water buffalo are bred in any great number and they have a hugely important economic function. Beef for human consumption is usually imported. 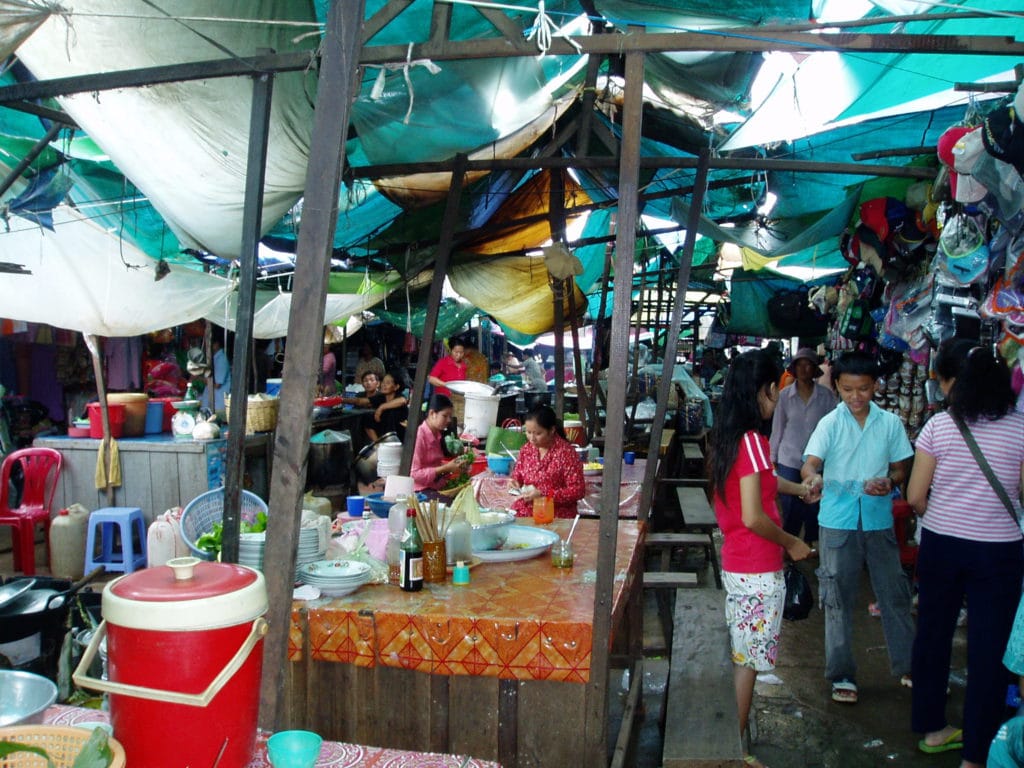 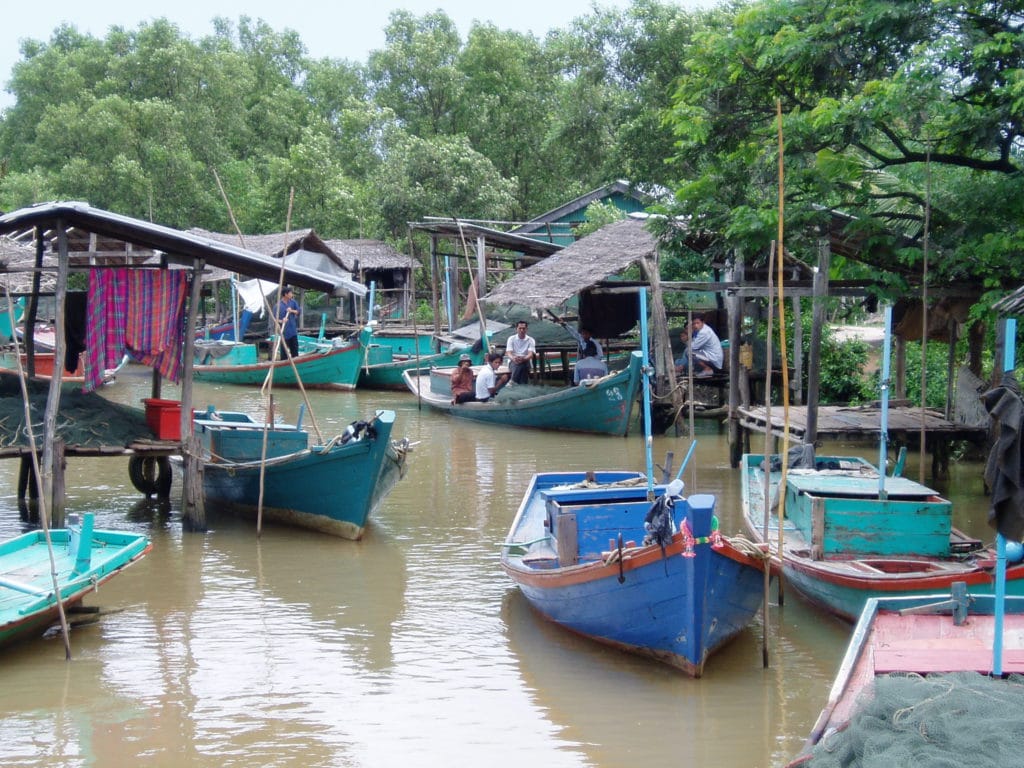 Rice as a grain or as vermicelli noodles, is the staple and forms the basis of most meals with the chosen protein often being used sparingly in a sauce. On the other hand, with little refrigeration, and having a hot climate, sea-based food is always eaten as fresh as possible. Many markets have buckets or large box containers in which the seafood is kept fresh until it is either sold to you and you walk away with it flapping, or it is processed and cooked in front of you. I found this fascinating and watched in awe, the skills of the cooks as they de-scaled and de-boned the fish or peeled and de-veined the larger prawns. The smaller school prawns were cooked whole. I learnt some new skills. And so I devised this quick-cook seafood dish which has become a favourite of the family. I usually serve it with side dishes of the additives I cant have such as bok choy or other Chinese greens. I always make sure that there are chopped peanuts or cashews, dried shallots and garlic as well as spring onions for the others. 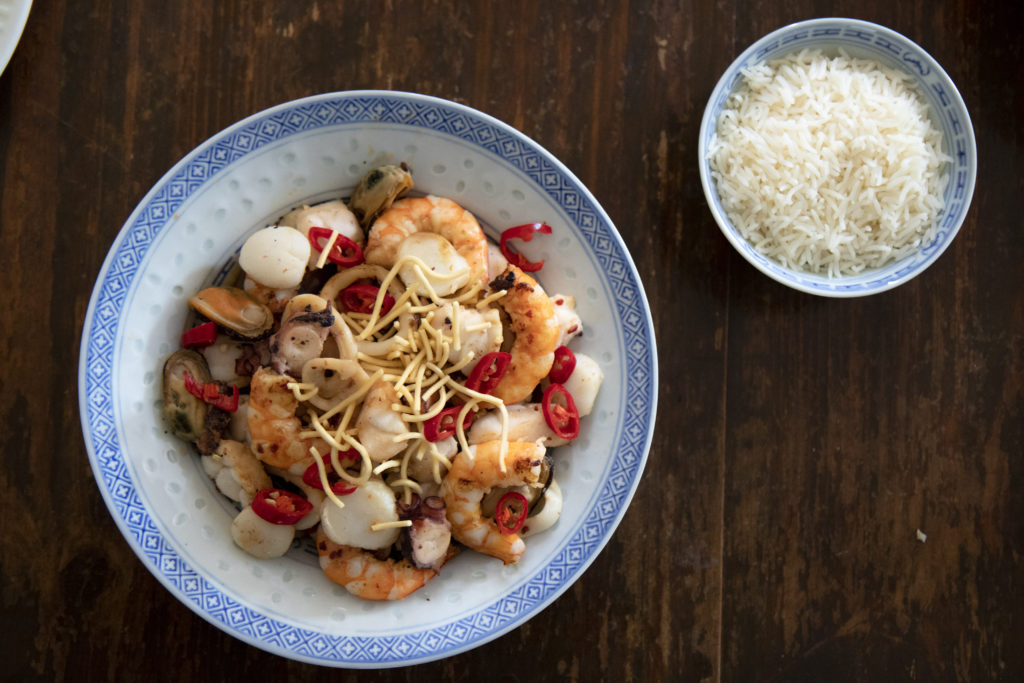 Unfortunately, some of the flavourings used in Cambodian food are items those of us on Warfarin should be aware of and find a substitute. The biggest issues I had were the kaffir lime and lemon grass. Also, sometimes, scallions and green onions but you can usually see them all and just push them aside. Most of the other spices and flavourings are fish sauce, tamarind, ginger, oyster sauce and coconut milk which are all fine in moderation. Their local Kampot pepper is the best pepper I have ever tasted. As a starting point it is red. It is also sweeter (if I can use that term) than our usual black pepper in that it does not have the traditional bite of Indonesian pepper yet it has a bite all of its own but much fruitier. It is always the preferred accompaniment to crab as it brings out the flavour but does not overwhelm it. Unfortunately, as is the case all over the world now, increasing amounts of ‘fresh greens’ are finding their way into Cambodian cuisine. As the great majority of Cambodians speak either English or French or can usually find someone to speak English to you, and everything is cooked on the spot, just ask for no greens and they are most obliging. We found that the younger children wanted to practise their English and were happy to help.

Bread is French style bread and wonderfully cooked usually. Baguettes, cut into slices for dipping in your curry, are a great joy and commonly offered. A pork broth called kuy teav is a must but ask for no lettuce although it is usually iceberg which is fine for us.

Tea is the common drink and really should be avoided altogether if you are on Warfarin. Coffee is mostly imported from Laos and Vietnam as there is little produced in Cambodia. ALWAYS drink bottled water. Even do your teeth with it. Make sure that the lid has not been opened. Be careful with the local craft beers and rice wines as they vary in strength.